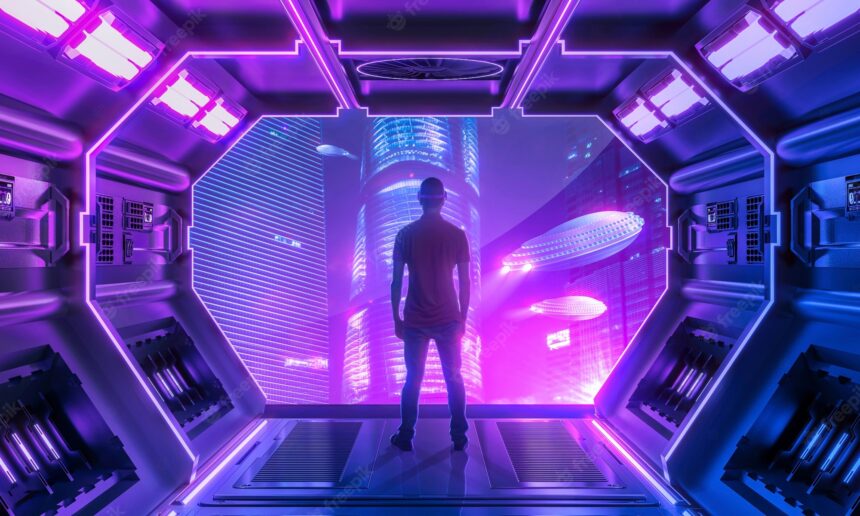 is the future a parallel, digital version of the real world?

Contents
Metaverse as a whole.Gaming as a starting pointDecentralization, democratic technologyMass adoption is the main requirement for Metaverse’s successWhat is it going to take for mass adoption?Metaverse Nowadays

When it comes to Web 3 one of the first things that comes to mind is the metaverse, NFTS, and blockchain. Metaverse has gained popularity over the last year, favored by the big techs jumping in, it’s become a project to keep an eye on. Let’s give a closer look at its actual meaning and what’s going on around it.

Metaverse as a whole.

A digital place where you can meet your people and explore the extra possibilities the metaverse provides. Imagine being able to fly, create imaginative buildings, customize your character, buy NFTs that can be converted into the real world, and even work on the metaverse can be a more immersive experience. The reality is that all those things are waiting for us in a not very distant future, the path is clear. Big tech companies are already displaying big efforts toward this auspicious project. As you might know, Facebook has redirected its business model in this same direction, even changing the company’s name to “Meta”. Microsoft is also highly invested in the industry with a big infrastructural advantage when it comes to developing hardware, and also great experience in gaming which appears to be the door that will allow those people that are not related to the crypto world to jump in.

Gaming as a starting point

Video games is a commonly used mean to attract the ordinary public to the cryptographic world. Its influence on teenagers and kids has been proven right with the massively crowded online events in digital universes such as Fortnite or Roblox.

On April 2020, the famous trap artist, Travis Scott presented his latest release “Astronomical” on Fortnite’s platform with an astonishing amount of 12.3M spectators, 24 times the capacity of a physical arena where the artist normally performs. Obviously, with those outstanding figures, the profits were also grossed up, the key, a new artistic format which provides a great show without people having to give up the comfort of their couches.

This revolutionary event has caused big interest to start paying attention to this new developing world of opportunities.

In February 2009 money was reinvented, and a new digital, decentralized currency with its payment system had been created, it was called Bitcoin. Bitcoin was the precursor of a whole new economic system based on many advantages, between those, decentralization stands out as the most innovative concept this new project offered.

Decentralization is the process of distribution and dispersion of power from a central authority. Most of the financial and government systems that currently exist are centralized, which means that there is a single higher authority in charge of managing them, such as a central bank or a state apparatus. There are many crucial drawbacks to this approach, stemming from the fact that any central authority also plays the role of a single point of failure in the system: any malfunction at the top of the hierarchy, whether unintentional or deliberate, inevitably has a negative effect on the entire system. Bitcoin was designed as a decentralized alternative to government money and therefore has no single point of failure, making it more resilient, efficient, and democratic. Its underlying technology, Blockchain, is what enables this decentralization, as it offers each user the opportunity to become one of the many payment processors on the network. Since the appearance of Bitcoin, many other cryptocurrencies, or altcoins, have appeared, and most of the time they also use Blockchain to achieve a certain degree of decentralization.

Then Ethereum appeared, which allowed the use of smart contracts, basically, software code based on blockchain to be executed automatically if a condition is met. Thanks to this, blockchain technology started to be used for things other than token transactions, for example, thanks to that we know NFTs.

So in this second chapter, there is no need for a bank or third-party escrow, and if either of us were to dispute any transaction.

Mass adoption is the main requirement for Metaverse’s success

An essential objective for any successful modern business model is scalability.

Scalability refers to the ability of an organization (or a system, such as a computer network) to perform well under an increased or expanding workload. A system that scales well will be able to maintain or increase its level of performance even as it is tested by larger and larger operational demands.

In this model, the capability to scale lies in its possibility to host large amounts of people provided by blockchain’s processing power.

We are aware that many blockchains are working in the metaverse, but we must name Internet Computer as one of the most promising in terms of this ability to scale. Decentralized in nature, with stronger decentralization goals in place going forward, their protocol offers the revolutionary design needed to make a metaverse “for the people, by the people” into a reality.

The metaverse will require an enormous amount of computing power to run from places all around the world to reduce the effects of latency. With DFINITY’s Internet Computer, its infrastructure is truly scattered across every corner of the globe without any reliance on any centralized entities to keep servers up and running. It is, in fact, an unstoppable overall machine that will ensure continuity and decentralization for the years and decades to come.

What is it going to take for mass adoption?

At the top of the list, is an improvement in the UX (user experience), the technology available nowadays is not the one that will increase people’s interest, it needs to be accessible, reliable, and portable. In addition availability for the public would bring more people in for obvious reasons. Increased demand would not only increase the profitability of the industry but also people’s trust, a strong base for any disruptive offer.

However many of the new projects that are currently being developed are already working with Unreal Engine, which implies that it won’t be long before these metaverses have the best of both worlds: realism + blockchain would be the formula for success.

Of course, it’s not only based on the future, it wouldn’t be realistic to be talking about something that doesn’t even exist, let’s analyze the presence of the metaverse.

As we said before, the metaverse is an alternative, virtual reality, it includes many different alternatives, that in the future are supposed to be linked up together in most cases.

The two main digital worlds are “Decentraland” and “Sandbox”.

Decentraland is an Ethereum-based, decentralized universe. They use the Eth blockchain to verify identity and record the ownership of all digital assets through a digital wallet. To enter Decentraland, you must use a wallet that is integrated into your web browser, they recommend Metamask. Inside there you can buy assets just for pleasure, to look cooler than the rest, or maybe you want to have an advantage over the rest of the gamers. But is not only about it. In decentraland, you can create your own business model. From an art exposition, as the one vibrant participated in, to a marathon with thousands of participants using NFTs as rewards and keys to join in.

There are a few metaverse projects on the Internet computer that are similar to decentraland. Of the first one, 1101, there are only a few advances that leave us expectant for its launching.

Plethora, which is already a metaverse that has some features, where you can explore and be part of many adventures and where many projects within Internet Computer are launching their NFT projects. What we have been talking about, the metaverse is that infinite possibility of having reality at your fingertips.

The Sandbox is a decentralized virtual world built with similar aesthetics to voxel games like Roblox and Minecraft. The latter is the world’s best-selling video game has surpassed 228 million copies sold. It was initially developed as a separate mobile game for iOS and Android back in 2012. Animoca Brands bought it in 2018 and transformed the project into an open-world metaverse platform of interconnected games, experiences, and virtual spaces. It is now regarded as one of the top metaverses to follow in the web3 space.

The limit is the sky, or even further, it’s all about imagination and creativity, what are you waiting for, you could be the next one to make something different happen and get rewarded for your intuitive imagination!